4 Cades Cove Animals You Can Spot During the Winter 4 Cades Cove Animals You Can Spot During the Winter

The Great Smoky Mountains National Park is home to a variety of wildlife that can be observed during every season of the year. If you’ll be spending some time in Cades Cove during the winter, it is one of the best areas in the Smoky Mountains to find animals! Here are 4 Cades Cove animals you might see when it’s winter time in the Smokies. Although the elk is the largest mammal in the park, the largest bird is the wild turkey. These birds can be spotted from just about anywhere, from Cades Cove Loop Road to the large fields throughout the area. You might be lucky enough to see a few of them resting if you look up into the trees! There’s a high chance you’ll also see wild turkeys because their current population is the highest it has been in the National Park since the 20th century.

Otters are one of the more active Cades Cove animals you can find, even in colder seasons. Initially, otters were fairly common in Cades Cove until the 1920s, when they were almost completely gone from the National Park. However, 60 years later, they were reintroduced into the Cades Cove area. These water-loving animals can be seen splashing around in Abrams Creek, so be sure to take a safe winter hike along Abrams Falls Trail! 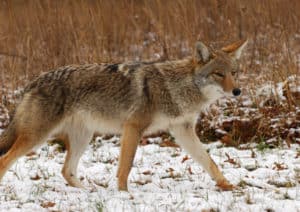 Coyotes made their way into the area around 1985. These animals are close to 4 feet long and 2 feet tall, and they can easily be mistaken for dogs. Although you can sometimes see coyotes darting across fields, you’ll really have to keep your eyes out for them. Other than mostly roaming at night, coyotes tend to keep to themselves, making them hard to spot right away or at all.

One of the other most common animals to see in Cades Cove is white tailed deer. These animals mainly eat plants, acorns, and nuts. A fun fact is that they will also eat poison ivy if they cannot find some of their favorite foods! Although they are most abundant during the summer, as that is the time when many fawns are born, white-tailed deer can be found venturing out into parts of Cades Cove where there are open fields during the winter. It can be exciting to spot animals since there are so many different ones to see. However, remember to observe all animals you encounter from a safe distance; it might be helpful to bring along binoculars or cameras with telescopic lenses to do so. Also, stay as quiet as possible when wildlife is nearby, and do not let any animals get close to you or attempt to feed them.