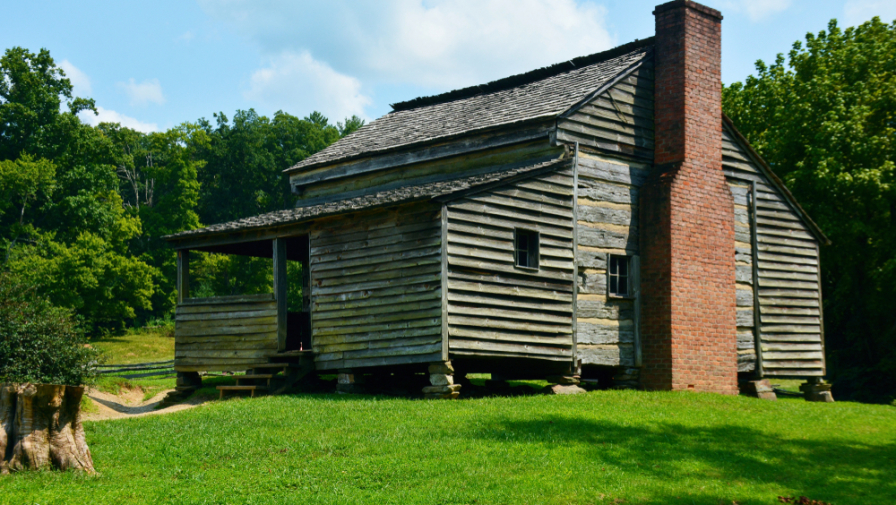 While driving along the Cades Cove Loop Road, you will discover a variety of fascinating historical cabins, including the Dan Lawson Place. This particular cabin is about three quarters of the way around the loop road, and you will also find a barn, smokehouse, and granary on the property. Lawson was a well known resident of Cades Cove who had this cabin built in 1856 and eventually became the largest landowner in the Cove after the Civil War. Read on to find out more about the history of Dan Lawson Place in Cades Cove Tennessee:

Construction of the Dan Lawson Place The Dan Lawson Place cabin was constructed in 1856 after Lawson purchased the property from his father-in-law, Peter Cable, relative of John P. Cable who built the famous grist mill in Cades Cove Tennessee. Due to the quality and workmanship of the cabin, and the fact that Peter Cable was a very capable carpenter, most historians believe that he helped Lawson construct the cabin. Since the house was constructed before powered sawmills came to the area, it was built of hand-cut logs, and the inside faces of the logs were chopped smooth. The most unique feature of the cabin was its brick chimney, as this was not a common feature of homes in Cades Cove at the time the cabin was built.

Modifications to the Cabin

Dan Lawson later expanded his cabin by adding a second story, as well as a large, covered porch for the Cades Cove post office that he ran from his home. The house you see today is not as it was in the beginning, as many additions and modifications have been made over the years. Although the original cabin was made of hand cut logs, machine-cut lumber was later added to the cabin since it provided a finer finished product. While visiting the cabin, it is easy to tell the original sections of logs from the later additions simply by the way they were cut.

Lawson continued to expand his land holdings over the years, and at one point he owned a solid strip of land from the state line on the ridge behind the cabin, across the center of Cades Cove and to the top of the mountains in front of the cabin! Some of the other buildings that were added to the property over time included a barn, smokehouse, and a granary, which are still standing today.

About the Lawson Family

Dan Lawson lived in Cades Cove Tennessee with his wife Sidney, and the couple was well known in their community. In addition to many other activities, Dan led singing at the Methodist Church while Sidney helped to educate the children. Their great-granddaughter, Robin Derryberry, donated some of the family’s items to the national park including a family bible, portraits, and a handmade dresser that Dan had built as a wedding present for his bride. These items are now part of the National Park Service Collections Preservation Center in Townsend TN.

Now that you are familiar with the history of the Dan Lawson Place in Cades Cove Tennessee, enjoy exploring this cabin and the other interesting buildings on the property! Learn more about some of the fascinating things to see along the Cades Cove Loop Road!