Beginning this spring, visitors to the Great Smoky Mountains National Park will have the chance to adopt black bear cubs as pets. The unprecedented new policy is part of the park’s effort to cut down on the number of abandoned bear cubs in Cades Cove. The National Park Service made the official announcement in a press release this morning. We have summarized the park’s new adoption initiative below.

Cub Abandonment on the Rise

According to the National Park Service, 2018 has seen a sharp uptick in abandoned bear cubs in the Smoky Mountains. Biologists are attributing this phenomenon to a rare parasite known as Trichinella ursus, a microscopic roundworm that invades the brains of bears. When found in cubs, the parasite is typically harmless, but an infection in an adult bear can have dramatic consequences. Changes in brain chemistry caused by the parasite can lead to mother bears losing interest in their cubs and ultimately leaving them to fend for themselves.

Experts believe that there was a significant T. ursus outbreak among the bears living in Cades Cove this winter, which has since subsided. As a result, the National Park Service has identified 85 bear cubs that have recently been abandoned. These cubs are currently being cared for in a remote, fenced-in area of the valley.

Finding long-term homes for the abandoned bear cubs in Cades Cove has proven to be a difficult task. Although the cubs are in good health and are not expected to have any developmental problems as they age, they are still potential carriers of T.ursus, which means that they can never be reintroduced to the wild. To complicate matters further, zoos are refusing to take these bear cubs because they could spread the parasite to other animals. Keeping the cubs in the fenced-in section of Cades Cove is not a permanent solution either, as scientists fear that they could still come into contact with wild bears. The “Care for a Cub” Campaign

Due to the unique set of circumstances at play, the National Park Service has determined that the best option is for the bear cubs to be adopted as pets. In the official press release, wildlife biologist Dr. Brad Lovett explains the reasoning behind the new “Care for a Cub” initiative:

“While the domestication of wild animals is rarely advisable, in this particular situation, we believe that it is not only appropriate, but necessary. Participants in our Care for a Cub program will be providing a much-needed service by opening their homes to animals with nowhere else to go.”

The National Park Service is looking for roughly 60 – 85 households (individuals, couples, or families) to adopt the abandoned cubs in Cades Cove. Bringing the cubs out of the wild and into people’s homes will prevent the spread of T.ursus, as the parasite does not infect humans or common domesticated animals like cats and dogs.

Applying to Adopt a Bear Cub

To sign up for the Care for a Cub program, you must reside in the continental U.S. and be at least 18 years old. All applicants must submit to a background check and a home inspection from a member of the National Park Service. Eligible households must be large enough to accommodate a fully grown black bear. On average, adult males are around 250 pounds and females are around 100 pounds.

Once applicants have been approved for adoption, they can visit the cub pen in Cades Cove to choose a bear (or bears) to take home with them. Each household can adopt up to two cubs, as long as they have the requisite space. If there are extenuating circumstances preventing you from traveling to the Smoky Mountains, it is possible for a cub to be sent to your home. Adopting a bear is free if you pick the cub up in person, but there is a significant shipping fee if the bear must be delivered. 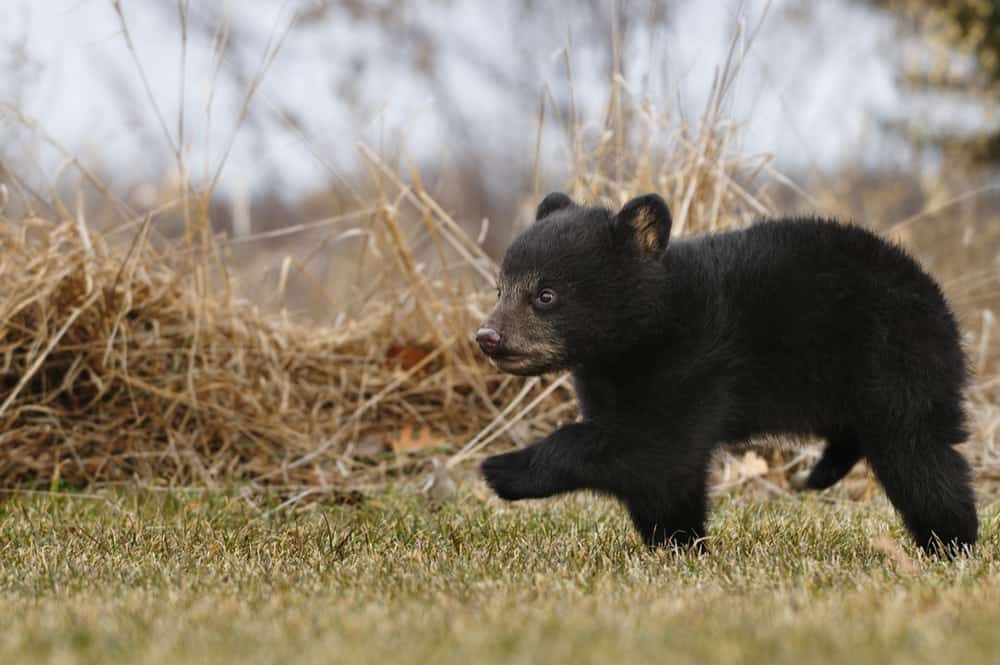 When they are hand-fed from a very young age, as the cubs in Cades Cove have been, bears can make wonderful pets. However, raising a cub isn’t for everyone. If you are considering adopting a bear cub, be sure to keep the following information in mind:

• As they reach adulthood, black bears must eat between 11 and 18 pounds of food each day. The majority of their diet is composed of fruits, vegetables, and nuts, but they occasionally enjoy fresh meat. It is recommended that at least once every three weeks, bear owners release a rat or another small rodent in their home for their bear to track down, kill, and eat.

• Much like cats, black bears sometimes cough up hairballs, which can be as large as a softball.

• Bears are very affectionate creatures and they love to cuddle with their owners, both as cubs and adults. It is not uncommon for fully grown bears to surprise their owners with a “bear hug.” These embraces can last 1 to 3 hours, and it is imperative that humans do not try to break free, as this can deeply upset the bear.

• When they sleep, black bears commonly emit a sound that is indistinguishable from that of an air mattress being deflated, only it is several decibels louder. Many bear owners wear earplugs to bed.

• While cubs are typically docile and sweet, bears do become more aggressive as they age, especially during mating season. It is important that owners routinely establish dominance over their bears, and the best way to do this is by beating them in a wrestling match. If your bear is acting up, you should immediately attempt to pin him to the ground. Don’t let your bear get up until he is whimpering like a dog.

For more information about adopting a black bear from the Smoky Mountains, don’t check back here. This entire story has been an April Fools’ Day joke! The bears in the national park are not infected with parasites, there is no Care for a Cub campaign, and bears should not be kept as pets (or wrestled). However, you can see black bears in the wild when you visit Cades Cove, as long as you stay at least 150 feet away and follow the proper safety precautions. To prepare for your next vacation, check out these Fun Facts About the Wildlife in Cades Cove.