Uncovering the History of Cades Cove: The Pearl Harbor Tree

Uncovering the History of Cades Cove: The Pearl Harbor Tree

History of the Pearl Harbor Tree

The Great Smoky Mountains National Park was established in 1934. People were still living in the area, and they were slowly making their way out. Many of them had farms where they grew crops and tended to livestock, and the Myers family was no different. Golman Myers owned a family farm in the Cades Cove area, and he started the process of moving his farm in the 1940s to Townsend since his land was in the Great Smoky Mountains National Park.

Myers liked keeping up with current events, mostly through listening to their battery powered RCA radio. The Myers were sitting around their radio when President Franklin D. Roosevelt interrupted the program they were listening to by announcing Pearl Harbor had been attacked by Japan. Myers knew in that moment the United States was going to go to war with the rest of the world.

With the looming threat of war and his oldest sons old enough to be drafted into the war, Myers wanted a way to memorialize the soldiers who lost their lives in the Pearl Harbor attack. He went out behind his house and found a small sweet gum tree sapling, no bigger than a limb. Myers pulled up the tree from where it was growing and transplanted it out in front of his home. He then placed an old automobile rim around the sapling and said, “We will remember this forever.” In the mid 1970s, Myers’ youngest son, Bernard, had a metal sign engraved with, “Golman Myers transplanted this tree December 7, 1941” on one side and “Pearl Harbor” on the other side. He wanted to commemorate the moment and help everyone who finds the Pearl Harbor tree in Cades Cove what it stands for. He attached the metal sign with a chain around the tree. Bernard said he just did it for his grandchildren so they could remember what their great grandfather did.

Today, you’ll find this sweet gum tree in Cades Cove surrounded by many other trees that have grown up where the family home used to be. It stands at about 60 feet tall, showing how much it has grown since being transplanted. The rim around the tree has grown with the tree, splitting itself. The gap between the two sides of the rim show how much time has passed since the rim was placed around the tree as a sapling. Although this memorial was created years ago, it’s a way people can remember the tragedy of what happened at Pearl Harbor.

How to Find the Tree in Cades Cove 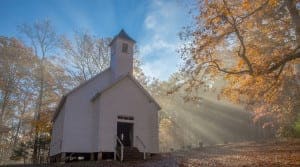 There is no clear path to the Pearl Harbor Tree in Cades Cove. To get to the tree, you should find the parking area that is 3.6 miles from the entrance gate to Cades Cove. This pull off has about 20 parking spots and is 0.5 of a mile away from the Missionary Baptist Church. From the pull off, walk west about 0.1 of a mile, and you’ll find a small clearing on the left side of the road. The point where the treeline on the western edge of the field meets the road is the bottom of the hill you climb to reach the Pearl Harbor tree. A short walk uphill due west will put you in the area of the sweet-gum tree.

There’s so much you can learn about the history of Cades Cove! Want to know even more? Check out these things you didn’t know about Cades Cove history!