If you’ve been on the Cades Cove Loop before, you’ve probably seen all the popular stops along the way. You can see all kinds of old homesteads and churches as you drive along. But there are quite a few things you may not know about. Here are the top 4 hidden gems along the Cades Cove Loop: There are several cemeteries throughout the Cades Cove Loop. You have probably seen the ones right next to the three churches. But did you know there are many more than those? Most of the cemeteries that aren’t at the church are family cemeteries where members were buried after they passed away. Some of them have gravestones along with trees to mark the graves. Most of these stones are not inscribed, but some of them are.

You may be wondering what the Pearl Harbor Tree is and why there’s one in Cades Cove. We go in depth about this hidden gem in our Pearl Harbor Tree blog, but long story short, families still lived in the area when Pearl Harbor happened. One man was so moved by the tragedy that he created a plaque and placed it around a tree near his home. You will find this tree a little off the beaten path, so you’ll have to park and travel a little bit to get there. While there’s no clear path on how to find the tree, many people still happen across it. There’s a parking area about 3.6 miles from the entrance. After you park, you should walk west about 0.1 of a mile, and then you’ll find a small clearing. There’s a small hill near the western treeline, and you just walk up the hill and look for the Pearl Harbor Tree. 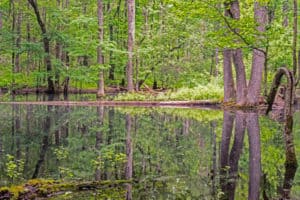 Another hidden spot you’ll want to see along the Cades Cove Loop is Gourley’s Pond. You won’t be able to actually see the pond from the road, so you’ll be able to get out and stretch your legs. You need to park at the LeQuire Cemetery at the end of Sparks Lane, then walk down the road for about 200 feet until you see a path on your right. Go down this path for about 100 feet until you see the pond. Gourley’s Pond is a wet weather pond, meaning if there hasn’t been significant rainfall, it might be empty.

While some people know about the cantilever barn, others don’t. This is a unique barn, and it is the focus of many visitors’ pictures and interest when they visit Cades Cove. This building is at Tipton Place along the second half of the Loop. You may be wondering what the difference between a regular barn and a cantilever barn is. The cantilever part is an overhang with a wide upper loft area that hangs over the lower level of the barn. This design prevented crops from rotting and would provide shelter during bad weather for livestock.