The Cool History About the Cantilever Barn in Cades Cove The Cool History About the Cantilever Barn in Cades Cove

Cades Cove is one of the most popular destinations inside the Great Smoky Mountains National Park. The area is full of natural wonder, and structures drenched in Appalachian history! There are many structures, walking trails, and pull offs that are worth exploring, but the cantilever barn in Cades Cove has a unique origin and design. It’s worth a stop to look at.

Where to find a cantilever barn?

In Cades Cove you can find the cantilever barn at the Tipton Place. Which you will come across on the second half of the 11 mile loop through Cades Cove.

What is a cantilever barn? 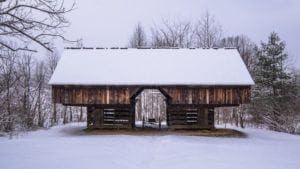 Cantilever barns have German, Irish, and Swedish roots from settlers that brought similar architectural influences when they settled here. The design is characterized as 19th century. Cantilever barns are most commonly found in Sevier County. Since these barns are so unique to just the local area, it’s hard to find a lot of information about the barns.

What was its purpose?

The barns have the distinct characteristic of having a wide upper loft area that hangs over the lower level of the barn. The overhang is what is known as a “cantilever.” The overhang design was perfect for farmers in the Smokies. The Great Smoky Mountains National Park usually receives 80 inches of rainfall each year, making it one of the rainiest places in the U.S. The high level of rainfall and humidity in the Smokies caused farmers’ crops to rot. The overhang was the golden ticket solution farmers needed! The cantilever would funnel the rainfall on the roof away from the storage cribs of crops. The open spaces between the cribs kept the structure ventilated allowing air to circulate to further reduce spoiled inventory. Live stock could also find shelter underneath the overhang from severe weather or hot, sunny days. This barn in Cades Cove is an architectural wonder! 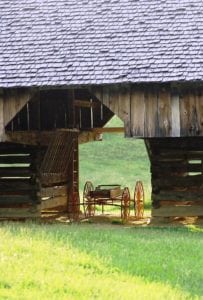 Fun Fact About the Cantilever Barn in Cades Cove

There’s a rumor or wives-tale in the Smokies about the unique design of the cantilever barn. Supposedly, the barn was designed to have that wide, overhang second-story to stay a step ahead of the government and taxes! Apparently, taxes were assessed based on square footage of a structure touching the ground. Hardly a third of a cantilever barn is on ground level. So, these architectural wonders could have possibly saved farmers big money on their taxes!

This barn in Cades Cove is truly phenomenal, and worth a stop to explore! The structure was built without any modern machinery. If you take the time you can marvel at the incredible detail that goes into cantilever barns. If you want to learn more about some of the other historic structures in Cades Cove, you can read about the beautiful, primitive Cades Cove churches here!

You can find other helpful information about all things Cades Cove here!