The Caughron Family: The Last Residents of Cades Cove Tennessee The Caughron Family: The Last Residents of Cades Cove Tennessee

Starting in the early 1820’s, settlers began traveling to Cades Cove to build homes and work the land in the valley. Way before the area was part of the national park, many families called Cades Cove home and spent their lives in what is now a popular destination for travelers to the Smokies. In fact, the last resident of Cades Cove Tennessee didn’t leave until 1999. Here is everything you need to know about the Caughron family:

Born in May of 1912, Kermit Caughron spent the majority of his life in Cades Cove. Growing up in a family of cattle farmers, Caughron spent his days herding animals through the cove, up along the border of North Carolina. His parents, George and Matilda, taught him the importance of his Smoky Mountain heritage and how to respect and appreciate the land around him. 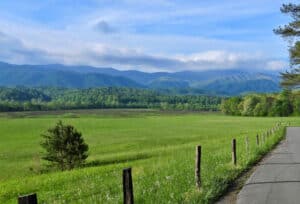 As he grew up and started a family of his own, he married Lois Shuler and they had four children, Rex, Roy, Ruth and Kay. As part of the last generation of children to be raised in Cades Cove, they were taught how to work the land, just as their parents and grandparents, but they also had fun!

Rex has spoken about his memories of fishing and hiking with his father. He has fond memories of spending time exploring Abrams Fall and Sugar Cove alongside his siblings and parents, way before a tourist ever stepped foot in the cove.

Their Time in Cades Cove

Growing up in Cades Cove his whole life, it was hard for Caughron to leave when the Great Smoky Mountains National Park was created and residents of the cove had to relocate. The thought of leaving the home they built from the ground up, with wood and salvaged materials from the Cable School, was hard to comprehend for the family.

Luckily, the Caughrons were able to negotiate a 5-year lease on their home. Kermit and Lois were able to move back to the home, where they resided until Kermit’s death in 1999. Until his death, Kermit was known to many visitors as “Mr. Cades Cove” and “The Bee Man”, as he raised hives at his homestead. Long before the Caughrons, Cades Cove was home to early settlers like John and Lucretia Oliver. The Olivers arrived at Cades Cove around 1818 and spent their first winter in an abandoned Cherokee hut, surviving with the assistance of the natives. The following spring, John constructed his family’s log cabin, the first permanent home in Cades Cove.

Cades Cove Tennessee also played host to a few war heros, including William “Fighting Billy” Tipton, who was given a land grant in the valley after his service in the War of 1812. Eventually, he and his brothers, Abraham and Thomas, owned the best agricultural land in the cove.

Even after the Olivers and Tiptons, Cades Cove became the home of farmers, blacksmiths, pioneers, heroes and more. Today, you’re able to see remnants of these settlers when you visit the Cades Cove loop.

Now that you know a little more about the Caughrons and their life in Cades Cove Tennessee, you can be on the lookout for other historic homes like theirs on your next trip to the cove. Are you curious to learn more? Discover Cades Cove’s rich history and educate yourself on the land for your next visit!