A Cherokee Legend from Cades Cove: How Rabbit Stole His Coat A Cherokee Legend from Cades Cove: How Rabbit Stole His Coat

The Cherokee people have deep roots in Cades Cove. Years before the first Euro-Americans settled in the cove, the Cherokee had their own village in the valley. Known as “Tsiya’hi,” which means “Otter Place,” the settlement was situated near streams that were teaming with otters. The name “Cades Cove” is taken from Chief Kade, the Cherokee leader of Tsiya’hi.

Although the Cherokee lost their claim to all of the land in the Smoky Mountains under the 1819 Treaty of Calhoun, their cultural influence in the area has persisted for generations. A number of colorful Cherokee legends from the Smokies are still told today. Below, you will find our retelling of the classic story from Cades Cove of how Rabbit stole his coat.

How Rabbit Got His Coat While the Cherokee called Cades Cove “Otter Place,” the nearby Gregory Bald mountain was known as “Tsistu’yi,” which means “Rabbit Place.” The Cherokee believed that Tsistu’yi was home to the “Great Rabbit,” an extra large bunny who was the chief of all the little rabbits. The Great Rabbit, who was sometimes just called “Rabbit,” is a mischievous trickster who appeared in numerous local legends.

In one memorable story, Rabbit is invited to a gathering held by all of the animals in the Smoky Mountains. The purpose of the meeting was to decide once and for all which critter had the most beautiful coat in the land. The front-runner for the contest was far and away Otter, who was rumored to have a truly spectacular fur coat.

Rabbit was jealous of Otter’s lovely fur, so he concocted a scheme to swipe the coveted coat. Before the gathering took place, Rabbit traveled to Otter’s home and offered to escort him to the meeting, since Otter lived far away and was unfamiliar with the area. Otter accepted Rabbit’s gracious offer, and the two animals set out on the trail.

When nightfall came, Rabbit and Otter stopped beside a river, where they built a fire and found a spot to sleep. Glancing up at the sky, Rabbit warned his companion that they might be in for some unusual weather. Rabbit explained that they were camping at Di’tatlaski’yi, a place where it sometimes rains fire. In order to protect his fur from any molten precipitation, Rabbit encouraged Otter to take off his coat and hang it on a tree limb. Otter thanked Rabbit for his sage advice, removed his coat, and soon drifted off to sleep.

With Otter fast asleep, Rabbit got to work. The cunning critter pulled out his knife and started carving a piece of unused firewood into a paddle. Then, Rabbit carefully placed a number of hot coals from the fire onto the paddle and proceeded to launch them towards Otter. As the chunks of coal fell down around him, Otter was roused from his sleep by Rabbit’s frantic screams of “It’s raining fire! It’s raining fire!” “Quick,” Rabbit urged him, “jump in the water, where it’s safe!”

Otter plunged into the river and found relief from the fiery downpour. In fact, Otter liked the river so much that he decided to make his home in the water, and he continues to do so to this day. After Otter had swum away, Rabbit snatched his coat from the tree limb and draped it around himself. Catching his own reflection in the water, Rabbit was thrilled to see how marvelous he looked.

Rabbit wanted the other animals to admire his stunning new coat, so he decided to attend their gathering to show off his getup. When he arrived at the meeting, however, Rabbit realized that he simply couldn’t stroll in wearing Otter’s coat without attracting suspicion. Instead, Rabbit pretended he was Otter by folding down his long ears and keeping his paws in front of his face, as if he was bashful.

The ruse worked for a while, and the other critters complimented “Otter” for his gorgeous coat. As Rabbit basked in the admiration, Bear, one of the wisest animals in the Smokies, started to suspect that something was amiss. Bear lumbered over to “Otter” and pulled his paws from his face, revealing Rabbit’s famous split nose. “That’s not Otter, that’s Rabbit!” exclaimed one of the animals at the gathering.

Now that he had been unmasked, Rabbit knew that the jig was up. Holding the coat close to his body, Rabbit tried to make a break for it before the angry animals descended on him. Bear grabbed onto Rabbit’s long tail with his claw, but Rabbit was moving so quickly that it was pulled right off. Rabbit escaped from the meeting and ran home to Tsistu’yi. Today, Rabbit still has a beautiful fur coat and a short, stubby tail. 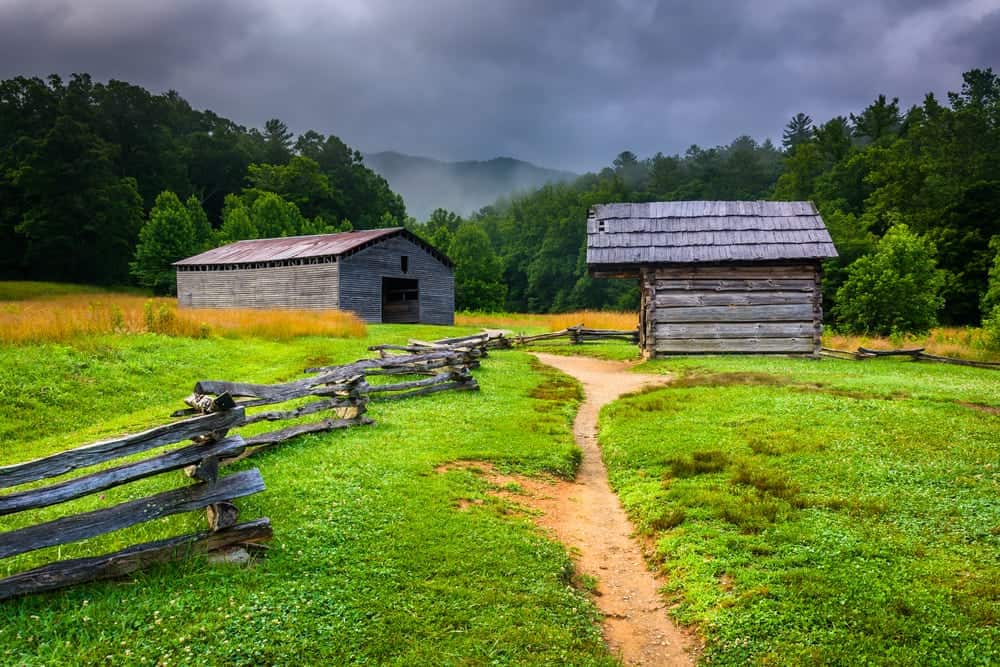 Looking for even more tall tales from Cades Cove? Check out one of our favorite ghost stories from the valley: The Cussing Cover!