Is Cades Cove haunted? We can’t say for sure (that’s a question for paranormal investigators), but we do know that there are a few Cades Cove ghost stories that have been told for decades around these parts. One of our favorite tall tales from the valley was transcribed in The Granny Curse and Other Ghosts and Legends from East Tennessee, a 1999 book by Janet Barnett and Randy Russell. Known as “The Cussing Cover,” this electrifying ghost story is perfect for your next campfire. Read on for our retelling of this classic yarn. 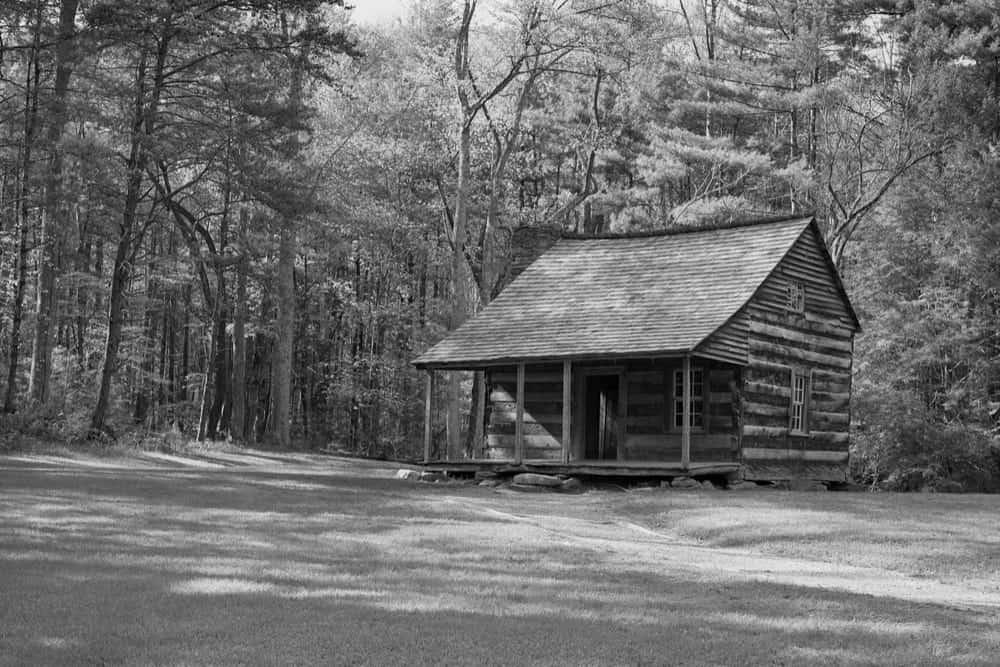 Long before the establishment of the Great Smoky Mountains National Park, the Esteps were one of the families that called Cades Cove home. Mavis, her husband Basil, and their children lived in a cozy two-room cabin along the Whistling Branch stream. The Esteps enjoyed a reasonably happy life in the valley, although Mavis was plagued with a persistent fear: she was absolutely terrified of being struck by lightning.

Mavis had been born during a thunderstorm, and according to local legend, she was thus fated to be killed by a lightning bolt. Due to her anxiety about stormy weather, Mavis never stayed out in the rain and banished metal beds from her household. Mavis even refrained from using her quilting needle when it was thundering outside, which wasn’t easy because she loved to sew.

Of all her many quilts, Mavis’s favorite was a patchwork made with pieces of one of Basil’s shirts, a red flannel. Mavis called her masterpiece, the “Cussing Cover” because Basil had been wearing the red shirt during the couple’s first marital spat, in which Basil had used some colorful language.

Ultimately, it was not lightning that took Mavis’s life but a severe illness. When it became clear that she had little time left, Mavis gave Basil permission to remarry but she implored him to promise her two things. First, she made her husband swear that he wouldn’t sell any of her beloved quilts. Second, she insisted that he never place any of her quilts on a metal bed. Basil acquiesced to these requests and Mavis passed shortly thereafter.

Less than a year later, Basil took a new wife, Trulie Jane Lawson, a much younger woman who also lived in Cades Cove. Trulie Jane was a large gal, and she found that Mavis’s old wooden bed simply wasn’t big enough for her. After some prodding, Basil agreed to buy a new metal bed for the couple to sleep on.

On one fateful evening, when the weather was particularly cold, Trulie Jane asked Basil if they could use one of Mavis’s quilts to stay warm. Ignoring the promise he made to his first wife, Basil allowed Trulie to bring a quilt onto the metal bed. Trulie chose the Cussing Cover, as she was quite taken with its distinctive pattern.

In the middle of the night, Trulie Jane awoke to a startling sight: an apparition of Mavis standing at the foot of her bed. The specter locked eyes with Trulie and started screaming and cussing up a storm. Trulie woke up her husband in a panic, but when Basil was roused from his sleep, Mavis had vanished. Despite Trulie’s protests, Basil assured his wife that it must have been a nightmare, and they both returned to sleep.

Just a few hours later, a brilliant flash of light burst into the Estep home and knocked Trulie Jane right out of bed. When the smoke cleared, she found Basil, lying on the floor, burnt to a crisp, where the metal bed had once stood. The rest of the cabin remained untouched, and the Cussing Cover was in pristine condition. Oddly enough, there hadn’t been any thunderstorms in Cades Cove that night, just the stray bolt of lightning that ended Basil Estep’s life.

After Basil’s death, Trulie Jane didn’t want anything to do with Mavis’s quilts, so she gave them to one of the Estep daughters, who in turn sold them to a collector. As the story goes, the Cussing Cover is still out there, possibly for sale in a shop around the Smokies. So, if you happen to come across a quilt with pieces of red flannel in it during your vacation, buy it at your own risk!

Planning Your Visit to Cades Cove We hope that you enjoyed reading one of the classic Cades Cove ghost stories! To prepare for your next visit to the Great Smoky Mountains National Park, we have put together a guide to 4 of the best things to do in Cades Cave!