If you want to explore the history of the Smoky Mountains, you don’t have to look any further than Cades Cove! This popular area is home to several historic structures, such as the Cable Grist Mill and the Cades Cove Missionary Baptist Church. One of the most interesting buildings is the Henry Whitehead Place in Cades Cove, a unique cabin that can be found just a short drive from the Cades Cove Visitor Center. Here’s everything you need to know about the Henry Whitehead Place!

The Story Behind the Cabin

The Henry Whitehead Place came to be after Henry Whitehead, a talented carpenter, married Matilda Shields Gregory. Matilda’s previous marriage did not last, as her husband, Ebenezer, deserted her and their young son, Josiah. As a result, Matilda had to raise their son on her own and do so without a home. Her brothers and the community stepped in to help her by quickly building a functional cabin in 1881. Even with its rushed construction, including roughly cut logs and a rubble stone chimney, Matilda was supposedly grateful for her new house. A few years later, Matilda met Henry. The two courted and eventually married in 1887, and Henry assured his new wife that she would have a much better home to live in.

The Construction of the Cabin 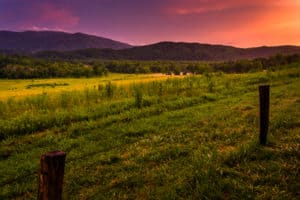 With his carpentry skills, Henry decided to make a 16-foot by 18-foot sawn log cabin for their family. The construction of the cabin included 4-inch walls made from thick logs, making it well-insulated. Henry also constructed a brick chimney for the home. Most homes had rubble chimneys like that of Matilda’s first home, as having a brick chimney was a rare amenity for Cades Cove cabins at the time. A cool fact about the chimney of the new cabin? Henry made his own bricks from scratch! As a final touch, Henry even went on to join both the new and old homes with a covered walkway. By 1898, Matilda and the rest of the Whitehead family had a beautiful cabin that outshined her previous home. In turn, the Henry Whitehead Place in Cades Cove eventually paved the way for the look of future cabins built in the community.

The Henry Whitehead Place is the only square log cabin that remains out of the two sawn log homes that existed in the Smoky Mountains. Many feel that the cabin is the best way to understand the big differences in earlier and later cabin construction in the area because of its closeness to the old cabin it replaced. The National Park Service helps with the cabin’s preservation. Its last restoration was in 2020 after it underwent a $6,500 rehabilitation project.

On your next trip to the Smoky Mountains, don’t forget to explore the Henry Whitehead Place in Cades Cove and the rest of the historic buildings in the area. Interested in learning about some of the structures in Cades Cove that are no longer in their original spots? Check out these five buildings that have been moved!