One of the most iconic landmarks in the Smoky Mountains is getting a tune-up! This September, the John P. Cable Mill in Cades Cove will have its water wheel replaced for the first time in 18 years. Swapping out the historic gristmill’s water wheel is no easy task because a new wheel had to be built completely from scratch. Local reporter Jim Matheny recently visited Cades Cove to profile the construction of the new water wheel in a piece for WBIR News:

About the John P. Cable Mill

Cades Cove’s mill was built in the 1870s by John P. Cable (1819 – 1891). The gristmill was a hugely important resource for folks living in the valley, as it allowed them to grind their corn and wheat into flour to make bread. As payment for use of the mill, the miller would take a percentage of their customer’s crops. In addition to grinding grains, the mill was also used to cut lumber.

Inside the gristmill, there is a “runner stone” and a stationary “bed stone,” which are responsible for cutting the raw materials fed into the mill. In order to get enough water to turn the mill’s wheel, John Cable needed to construct a series of diversions along Forge Creek and Mill Creek. The water wheel is 10 feet and 9.5 inches tall and 5 feet wide.

There were once six or seven mills in Cades Cove, but the John P. Cable Mill is the only one that remains. The mill was rebuilt in the 1930s by the Civilian Conservation Corps and is still in operation today. When you visit Cades Cove, you might see a volunteer working at the Cable Mill who will answer questions and grind corn right before your very eyes. Guests can even take home a bag of freshly ground corn from the mill! Although the current wheel for the Cable Mill has been in use since the year 2000, water wheels were historically swapped out every 7 – 10 years, much like the tires on a car. Over time, wheels will start to wear out or rot to the point where they aren’t turning properly. Back in the day, mill owners would have stacks of water wheels waiting in their barn.

Unfortunately, there weren’t any spare wheels available for the John Cable Mill in Cades Cove. Instead, Delayne Hodges, a historic preservation expert, was charged with the mission of building a brand new wheel for the mill. Hodges took an old-school approach to the job; measuring the existing wheel, drawing the new wheel on a piece of paper, and drawing it out to size in his workshop.

The new wheel is made from locally-milled white oak lumber. According to Hodges, “White oak is indigenous to the area and it’s what would have been used to make these wheels because it is very resistant to water. That’s why this kind of wood was also used to make ships.” The lumber and hardware for the wheel cost $7,400 and Hodges spent four weeks working on the project. 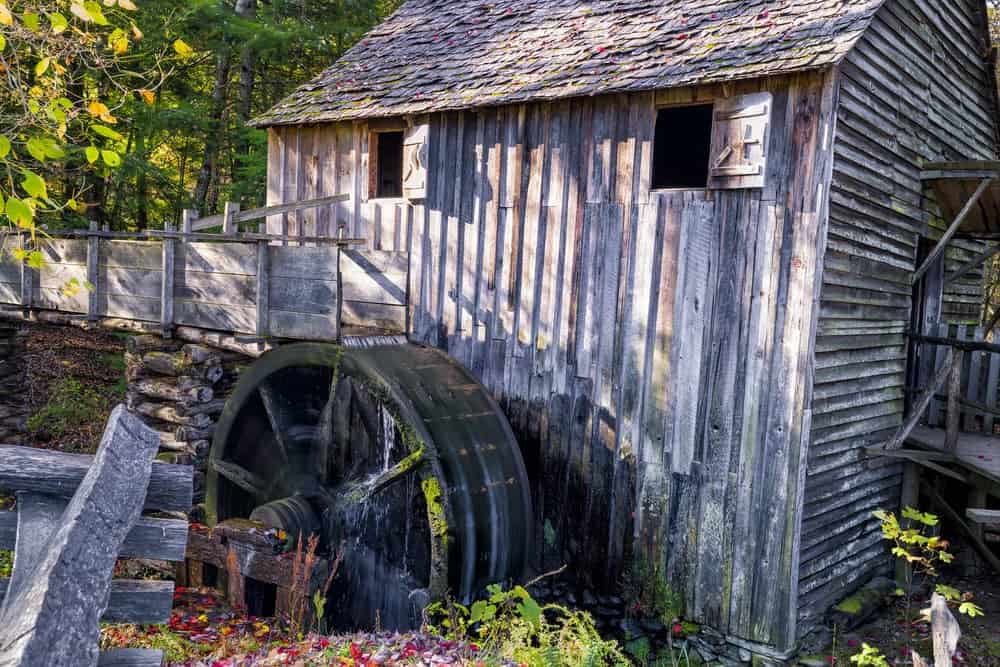 Before the new water wheel is installed, the National Park Service plans to remove the old wheel and spend two weeks improving the mill’s water flow and drainage. There is currently a pool of water at the bottom of the old wheel, which erodes the wheel faster than usual and makes it harder for the wheel to turn.

The new wheel for the Cable Mill in Cades Cove should be spinning away by early September and it is expected to last for another 15 – 20 years. When the time comes to replace it, the process should be a bit easier, because Hodges drew up an official blueprint for future preservation experts to use.

Want to learn about another one of the beloved historic buildings in the valley? Read all about the fascinating history of the cantilever barn in Cades Cove!