Gregory’s Cave was actually the first cave in the national park to be turned into a commercial cave. It was opened to the public in July of 1925 by the Gregory family who still lived in the area. During this time, there were wooden walkways and electric lights. Adults were charged $0.50 for admission, and children got in for free. Then, during the Cold War, the cave was set up as a fallout shelter, stocked with food, water, and emergency supplies for up to 1,000 people.

The Gregory family lived on their property and showed Gregory’s Cave to the public until 1935. The property was bought by the national park, but the family was given a “lifetime dowry.” They were allowed to stay on their property until Elvira Gregory passed away in 1943.

Gregory’s Cave is one of the largest caves in the area. Caves in Tennessee are formed when limestone and sandstone are weathered and fractured over time. The entrance to the cave sits at the bottom of what looks like a rock wall. It is 10 feet wide and 4 feet tall. The rest of the cave consists of a single passage that ranges from 22 to 55 feet tall and is an average of 15 feet wide. Along one of the side passages, there are tally marks on the walls, most likely left from miners. There is a metal barrier gate to prevent people from going deep inside the cave. You will be able to enter the mouth of the cave. 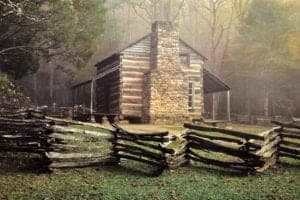 Since you know about this cave in Cades Cove, you’re probably wondering how to find it. You’ll drive along the Loop until you reach the John Oliver cabin. Park your vehicle and find the dirt road that is blocked with metal bars to prevent vehicles from entering. You’ll walk along this road until you see two picnic tables on the right. Keep walking until you see trees with boxes on them on the right. Then you’ll see the rock cropping and the cave entrance.

Other Points of Interest

Gregory’s Cave isn’t the only interesting place to see along the Cades Cove Loop. Here are some other spots to check out:

Another interesting place you’ll have to search for is the Pearl Harbor Tree. When Pearl Harbor was attacked, one of the men who lived in Cades Cove made a monument to honor the people who died that day. While you will have to search in the woods to find the tree, it’s definitely worth it. One of the most unique buildings along the Loop is the cantilever barn. Sevier County in Tennessee has the most cantilever barns in the entire world. Experts believe the structure was created by combining several different kinds of architecture. Plus, it was ideal for keeping crops and livestock dry during the rainy weather.

Abrams Falls is a waterfall you can hike to from Cades Cove. The trail is considered moderate and is 5 miles roundtrip. You’ll hike through old forest growth and then alongside the river until you finally reach the falls.

Gregory’s Cave and these other places are just some of the cool things you can see when you visit Cades Cove. Here are some other hidden gems along the Loop you should find!