Cades Cove owes its immense popularity to the great abundance of animals that frequent the area. Millions of visitors flock to this valley each year to catch a glimpse of the Smoky Mountains’ most iconic critters, including white-tailed deer, wild turkeys, pileated woodpeckers, and, of course, black bears. Before you plan your sightseeing trip in Cades Cove, check out the following tips for finding and observing wildlife:

1. Know What to Look For and When 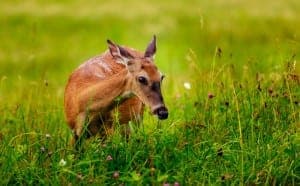 If you want to see Cades Cove wildlife, you should know when the animals you’re seeking are most likely to appear. This relates to both the time of year and the time of day. Some animals, such as whitetail deer, are plentiful throughout the year, though fall (their breeding season) is the best time to see them. Some animals, such as raccoons, are nocturnal, so you will have to visit the area at night if you want to see them. If you want to see black bears, you should visit Cades Cove sometime between late spring and early fall. In general, you are most likely to see wildlife in the early hours of the day and towards dusk.

2. Watch Animals at a Safe Distance

Animals in the Smoky Mountains are wild and should not interact with humans. It’s unsafe for both you and the animals if you get too close. Bring a good pair of binoculars and a camera with a telephoto lens so you can get clear pictures at a distance. A good rule to keep in mind is that if animals are behaving differently because they sense you are there, you are too close.

3. Be as Quiet as Possible

You will have a much greater chance of seeing Cades Cove wildlife if you move around quietly. Animals have a healthy fear of humans and usually keep their distance. If you want to see as many critters as possible, you should keep a low profile. The best way to do this is to walk as softly as you can and avoid speaking. Standing or sitting still will give you the best chance of seeing animals without disturbing them.

Going horseback riding with Cades Cove Riding Stables is one of the very best ways to tour the valley. Taking a guided trail ride in Cades Cove gives you the chance to experience this scenic area while riding a gentle, well-trained horse. Because the horses walk slowly and never gallop, you will have an opportunity to view plenty of wildlife. Other options include guided carriage rides and hayrides.

Black bears are plentiful in the Smoky Mountains, although they aren’t typically visible because they generally avoid humans. Cades Cove, however, is one of the best places to see them. Your best chance to see black bears is early in the morning or late afternoon, when they are likely to be searching for acorns, insects, and other food. Always be extremely cautious around bears and keep a safe distance. Never offer them food, as this causes bears to lose their fear of humans and can make them unpredictable.

6. See How Many Types of Birds You Can Spot

Cades Cove is a bird watcher’s paradise, with more than 200 species living in this area. While you probably won’t see that many on any given day, you have a good chance of viewing a variety of bird species, including bluebirds, sparrows, red-tailed hawks, wild turkeys, crows, and pileated woodpeckers. If you visit during autumn you may even see some golden eagles flying overhead. This is another reason to bring a good pair of binoculars with you!