History Behind the Civilian Conservation Corps in Cades Cove TN History Behind the Civilian Conservation Corps in Cades Cove TN

While traveling along the Cades Cove Loop, you may have noticed a historical marker across from the Missionary Baptist Church that honors the Civilian Conservation Corps or CCC. This marker refers to the group of men who were responsible for building the roads, bridges, campgrounds, trails, and picnic areas that we all enjoy today, which is why the rock plaque states “If you seek their monument, look about you.” Here is the history behind the Civilian Conservation Corps in Cades Cove TN:

Founding of the Civilian Conservation Corps

The CCC was established by Franklin D. Roosevelt in 1933 as part of his New Deal legislation. The goal was to put hundreds of thousands of young men to work on environmental conservation projects to combat unemployment during the Great Depression. The United States Army organized the transportation of enrollees to work in camps across the country, which put more than 300,000 men to work! These men, who were all ages 18 to 25, were enlisted for a minimum of 6 months and paid $30 once a month for their work.

CCC Camps in the Smoky Mountains There were roughly 22 CCC Camps in the Smoky Mountains alone from 1933 to 1942, and as many as 4,000 men worked in these camps including those in Cades Cove TN! During their time in the camps, the men built trails, bridges, and campgrounds in an effort to encourage citizens to get out and enjoy America’s natural resources. Much of the early development of facilities and restoration of the early settlers’ buildings was done by the Civilian Conservation Corps, and they also constructed the Sugarlands Visitor Center and the Rockefeller Memorial near Newfound Gap. They even built the water system that still serves the Newfound Gap area today!

End of the CCC

At the start of World War II, the majority of CCC camps were closed down as Congress discontinued funding and allocated the nation’s resources towards the war effort. Many of the young men who worked in the camps were also needed to fight in the military, so the CCC camps essentially turned into ghost towns. By the time the program ended, Roosevelt’s “Tree Army” had planted more than 3.5 billion trees on barren land and contributed to an impressive number of state and national park structures! The CCC became a model for future conservation programs and today more than 100 corps programs operate at local, state, and national levels.

Evidence of the CCC in the Smokies 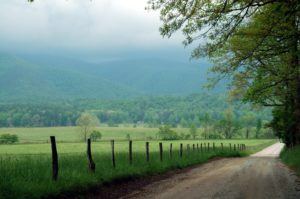 There are monuments and statues across the country that are dedicated to the CCC, including the historical marker in Cades Cove TN. While very little evidence of the CCC Camps still exists in the Smokies, a keen eye may catch some remnants while traveling the Cades Cove Loop Road. The building ruins in the fields across from the Primitive Baptist Church are thought to have been part of the CCC Camps. Also, if you visit the loop road during the spring months, you may be able to make out “Co. 5427” written in daffodils to the right of the Missionary Baptist Church. This was a CCC Camp Identification Number that was planted when the park’s trails were originally created.

Now that you know the background of the Civilian Conservation Corps in Cades Cove TN, be sure to visit the historical marker that honors the hardworking men of the CCC! Click here to learn more about the fascinating history of Cades Cove!