When you see the historic cabins in Cades Cove as you drive through, you probably wonder what the people who lived in them were like. What kind of history is there in these buildings? We want to share some information about these buildings you probably didn’t know. You might look at the cabins differently after you learn a little more about them! Here are 5 things you didn’t know about the historic cabins in Cades Cove: Most of the cabins along the Cades Cove Loop were built in the spot they still stand, but the Gregg-Cable house is one of the only cabins that has been moved. It was built by Leason Gregg in 1879 on Forge Creek Road. In 1887, the house was sold by Gregg to the children of John P. Cable, the man the grist mill in Cades Cove is named after. Becky Cable, one of the children, lived in this cabin until her death in 1940. Then, the National Park Service moved the cabin into Cades Cove near the grist mill.

2. Last Stop on the Loop is Carter Shields Cabin

The Carter Shields Cabin is the last cabin you can see before you leave the Loop. It is believed to have been built in the 1830s. It is a simple cabin in Cades Cove, and it is a single room. This building is the only one on the property where it sits. The Carter Shields cabin is one of the most photographed buildings along the Loop because in the spring, there are several blooming dogwoods in the area, and the fence around the property makes a beautiful scene. 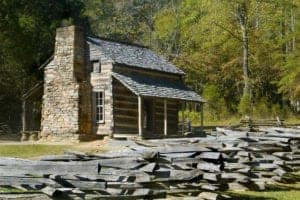 4. Elijah Oliver Place had a Room for Travelers

Elijah Oliver Place is a pioneer complex with several historic buildings you can explore. There’s a chicken coop, smokehouse, corn crib, and a springhouse. The main cabin was built over a spring so the family could keep eggs, milk, and other foods chilled. On the right side of the front porch of this building, there is a small enclosed room that was used to house travelers. Elijah Oliver was known for being very hospitable, and many people believed it was because of his deeply religious roots. He never charged the travelers for their stay and provided them with a warm place to sleep and food. The property the Dan Lawson cabin in Cades Cove sits on originally belonged to Peter Cable. When Lawson married Cable’s daughter, he gave him the property, and Lawson built the cabin. Over the years, Lawson added a front porch and a second story to the cabin. He used this area for a post office in Cades Cove. He also ran a general store for the people in the area.