The Cades Cove Loop: What to Expect When You Visit for the First Time

The Cades Cove Loop: What to Expect When You Visit for the First Time

Cades Cove is one of the most visited places in Great Smoky Mountains National Park. Cades Cove is a small limestone valley packed with history, scenery, and wildlife. The 11 mile loop is the usher to everything Cades Cove has to offer. The Cades Cove loop can be navigated by car or bicycle. This popular attraction is open year round and gorgeous to see anytime of the year. At the start of the Cades Cove loop there will be a place to rent a bicycle and a stable to ride horses. As you enter the loop you will start to see gentle hills and pasture like views. The first iconic structure to see is John Oliver’s cabin. You can see the cabin from the road, so it is a short walk through the field. Once up at the cabin there is information that elaborates about the history of the cabin and John Oliver, and it’s possible to walk inside to explore the cabin.

Halfway Down the Loop

Further down the Cades Cove loop you will pass a few primitive churches. It’s possible to get out and explore these old churches as well. Take a seat in a pew and imagine sitting there for a sermon during those times. The next big draw around the loop is the Abrams Falls Trail. Abram Falls is a moderate five-mile round trip hike. The waterfall at the end is only twenty feet tall, but has a remarkably powerful amount of water spilling over it. At about halfway around the loop you will come upon the Cades Cove Visitors Center. Here you can use a restroom, look at maps, talk to park rangers, and find something unique in the souvenir shop. The Cable Mill is also a neat place to walk over and see, conveniently located right beside the Visitor’s Center. 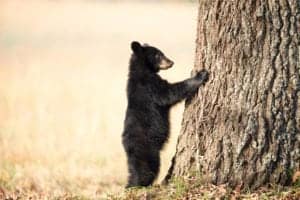 The last half of the Cades Cove loop goes by three other historic cabins. Each are worth exploring, just watch your head on those low ceilings! Each cabin also has a small section that provides a history of the structure and its past residents. A final big draw for the Cades Cove area and loop is the wildlife that can be found. Deer are often seen in the pasture areas, chipmunks and squirrels are all throughout the loop, but then there are black bears. Rarely, will a Cades Cove visit not lead you to spotting one of these black furry creatures. Bears are most often spotted during the second half of the loop when there is more vegetation and forest around.

The End of the Loop

At the end of the Cades Cove loop there’s a picnic area, so you can refuel after your 11 mile adventure. You can return bikes here, and or go see the stables also. After completing the loop it’s hoped that you have gained a little knowledge of the area and seen some of its local furry residents. As mentioned before any time of year is beautiful to visit this area. Right now, however, will offer a nice view of the changing colors and smells of crisp fall air.

Ready to explore Cades Cove for yourself? This is an experience you can’t pass up on your trip to the Great Smoky Mountain area! Take a look at all of our other blog posts for more information about Cades Cove.