5 Animals You Might Spot on the Cades Cove Loop 5 Animals You Might Spot on the Cades Cove Loop

One of the most exciting things about visiting the Great Smoky Mountains National Park is the opportunity to see some of the unique wildlife in the area. The Cades Cove Loop offers wide open fields that are perfect for wildlife viewing, while allowing you to keep a distance that is safe for you and the animals. Here are 5 animals you might spot on the Cades Cove Loop. 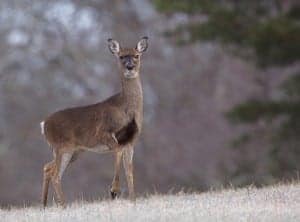 White tailed deer are often seen in the wide open fields of Cades Cove. The males begin to grow antlers by their second spring, and the mating season begins in September. White tailed deer give birth in late June, so visit in the Summer for a chance to spot a fawn! The diverse plant species in the Great Smoky Mountains provide ample food for the deer. The size of the deer population can change frequently due to overpopulation and predation from animals like coyotes, bears, and bobcats.

Coyotes first arrived in the Great Smoky Mountains National Park in 1985. Ever since then, they have played a vital role in controlling the populations of small animals in the area. Many visitors to the Cades Cove Loop have spotted wild coyotes howling in the open fields! If you spot a coyote, remember to keep your distance and do not, under any circumstances, feed the animals you see in the park. While driving the Cades Cove Loop, you just might spot the Great Smoky Mountains National Park’s largest bird, the wild turkey. Turkeys were one of the most abundant species in the park when it was first approved in 1935. In the decades following, many bird species declined as they came in closer contact with humans. In the 1950s, attention was focused on restoring the bird populations. Today, the turkey population in the park is the highest it’s been in 100 years.

Groundhogs, also known as woodchucks, are also frequently spotted in the Cades Cove Loop. Groundhogs are large, bulky rodents with broad flattened heads. They are most abundant in the open meadowlands, so Cades Cove is a great place to look! These animals have excellent eyesight and can quickly climb trees to easily avoid predators. When you think of Smoky Mountain wildlife, black bears are probably the first thing that comes to mind. This is because the Great Smoky Mountains National Park is one of the largest protected areas for them to live in the Eastern United States. In Cades Cove, the black bears are most active right before dawn, or right after dusk. Black bears’ diet consists mostly of berries and nuts, with some meat from insects and other animals.

These are just a few of the many animals you might see on your visit to Cades Cove Loop! If you do spot an animal, remember to keep your distance. Don’t approach any animals or allow them to approach you, and never feed any animals in the park! Check out our page on places to stay in Gatlinburg to begin planning your trip to the Smokies!