Although there is no evidence Native Americans resided in Cades Cove, there is knowledge that regional plants were gathered, animals were hunted on the grounds, and trails were used to travel long distances in Appalachia. The Smoky Mountains were very important to Native Americans, especially the Cherokee, not only for the abundant resources, but for the spiritual qualities as well. We’ve gathered information on the Native American history of Cades Cove: The Cherokee Native Americans have a history of plant use for medicinal, political, and spiritual purposes which have been documented by early explorers and are still incorporated in their society today. The spiritual association of plant use involves prayers, dreams, conjuring, and ritual. Divine people called shamans have gifted knowledge from the supernatural. The shamans use herbal remedies to heal people and have a connection to the spiritual world. All of these factors make plants use a sacred event that has shaped Cherokee culture.

The Native American history of Cades Cove goes back generations. The Smoky Mountains have immense natural resources that the Cherokee took advantage of for many purposes. Herbal remedies are multi-purpose and can treat illnesses or use as a relaxant. Ingesting of specific plants for ceremonies was common. The plant Sochan (Rudbeckia laciniata) is a spring green plant and is common in the Smoky Mountains region. The Cherokee traditionally harvested this plant that was rich in Vitamin A, iron, calcium, and potassium. Plant collecting on federal property is illegal, but the Cherokee tribe and the National Park Service have had an agreement since 2019 that tribal members can gather Sochan on the Smoky Mountains National Park property.

The Cherokee traditionally traveled through the valley and used the area for hunting grounds. Wildlife was abundant including white-tailed deer, elk, wild turkey, coyote, bison, and black bears which drew Native Americans to the area. Processing of the wildlife for food and other resources such as clothing was common. The animal bones were useful as tools and then shaped into items like sewing needles or utensils. Earlier groups probably interacted with Cades Cove as well although we have no knowledge of what they called themselves. The area of Gatlinburg was also once a traditional hunting ground. One thing is for sure, the area was very important as a resource for the everyday items Native Americans used in their everyday lives. 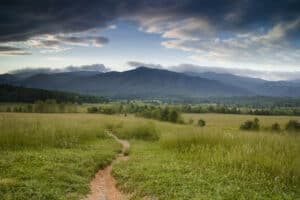 There is archaeological evidence the Cherokee Native American tribe traveled on at least two primary trails which crossed Cades Cove. The two trails traveled across the Smoky Mountains from North Carolina to Tennessee. Some of the traditional trails are the current park trails and roads. Through archaeological investigations, temporary Native American camps in Cades Cove existed. It appears most of the activities in the valley included hunting game and plant gathering. Resource processing probably occurred in the villages.

Interested in learning more about the Native American history of Cades Cove? We have made a list of the six things you didn’t know about Cades Cove history!